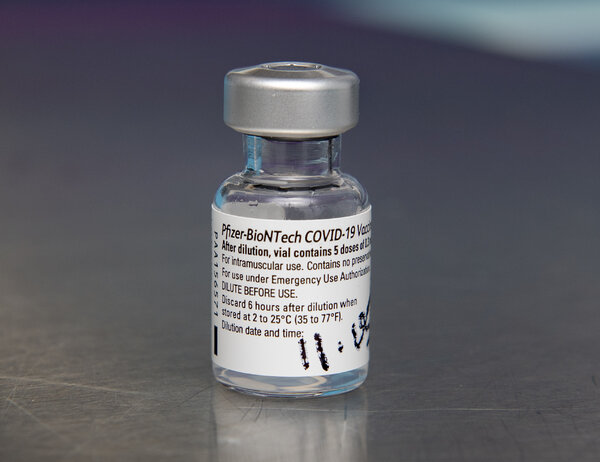 The German company BioNTech partnered with Pfizer to develop the coronavirus vaccine known as BNT162b2, the generic name tozinameran or the brand name Comirnaty.

A clinical trial showed that the vaccine has an efficacy rate of 95 percent in preventing Covid-19.

A Piece of the Coronavirus

The SARS-CoV-2 virus is studded with spike proteins that it uses to enter human cells.

The Pfizer-BioNTech vaccine is based on the virus’s genetic instructions for building the spike protein.

mRNA Inside an Oily Shell

The vaccine uses messenger RNA (mRNA for short) , genetic material that our cells read to make proteins. To protect their vaccine, Pfizer and BioNTech wrap the mRNA in oily bubbles made of lipid nanoparticles.

mRNA molecules will quickly fall apart at room temperature. The vaccine therefore needs to be transported and stored at –94°F (–70°C) to stay viable.

After injection, the vaccine particles bump into cells and fuse to them, releasing mRNA. The cell’s molecules read its sequence and build spike proteins. The mRNA from the vaccine is eventually destroyed by the cell, leaving no permanent trace.

Some of the spike proteins form spikes that migrate to the surface of the cell and stick out their tips. The vaccinated cells also break up some of the proteins into fragments, which they present on their surface. These protruding spikes and spike protein fragments can then be recognized by the immune system.

When a vaccinated cell dies, the debris will contain many spike proteins and protein fragments, which can then be taken up by a type of immune cell called an antigen-presenting cell.

The cell presents fragments of the spike protein on its surface. When other cells called helper T cells detect these fragments, the helper T cells can raise the alarm and help marshal other immune cells to fight the infection.

Other immune cells, called B cells, may bump into the coronavirus spikes on the surface of vaccinated cells, or free-floating spike protein fragments. A few of the B cells may be able to lock onto the spike proteins. If these B cells are then activated by helper T cells, they will start to proliferate and pour out antibodies that target the spike protein.

The antibodies can latch onto coronavirus spikes, mark the virus for destruction and prevent infection by blocking the spikes from attaching to other cells.